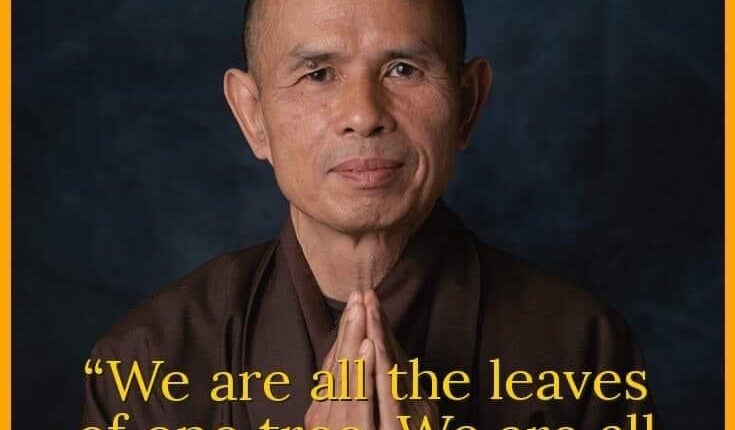 Venerable master Thich Nhat Hahn who died today left an indelible mark on the modern consciousness through his devotion and commitment to the Buddha Dhamma. He wrote prolifically on different aspects of the Buddha Dhamma and contributed immensely to the spread of Buddhism in the modern world.

No mud, No Lotus
Master never preached Buddhism in abstract. His Buddhism was very much grounded in the suffering of the world. Following the tradition of great teacher from China, Master Tai Xu, Thay (as he is known among his followers) always engaged with the world around him. During the Vietnam War, Thay did not remain indifferent to the sorrows and sufferings around him. He was actively engaged in peace efforts and worked hard to spread the teachings of the Buddha among the activists. His plea to mindfulness based social action is a revolutionary contribution. His books become instant relief for the people who were engaged in the peace efforts. Thay was nominated for Nobel Peace Prize by no other than Martin Luther King Jr.

Thay demonstrated through his life that the duty of a Buddhist is to engage with the oppressive social and political structures. This approach of Thay is what we need in the world today. There is no awakening without efforts to dispel darkness around us. No mud, No lotus.

All in one & One in All
Thay taught Avatamska Sutra in a simple language of how one lotus contains many lotuses and how many lotuses contain a lotus. His teaching of interbeings is the most simplified interpretation of the teaching of interdependence. He taught to see truth that the Buddha saw in the songs of the birds and the very act of seeing itself.
Breath, you are alive!

He presented a triad of three Suttas as a guide to meditation: Bhaddekaratta Sutta, Anapana Sati Sutta, and Satipatthana sutta. His simple teaching on mindfulness of breathing could be taught to even children.
Transforming mind

His take on Abhidhamma, particularly following Vasubandhu, was practical. He elaborated the mental states and mental factors so easily that one could relate to them directly and easily.

The Biography of the Buddha
Old path and White clouds is a masterpiece. The life of the Buddha is told from the perspective of a downtrodden boy. This spiritual classic quenched the spiritual thirst of many many people.

Thay taught us how to bring harmony in teaching Buddhism as one school of practice drawing from texts from all the available traditions.

He taught us to engage with the world.
And he taught that the Buddha’s teachings can be explained as a matter of fact and that they serve the humanity.
Triple salutations to Thay!